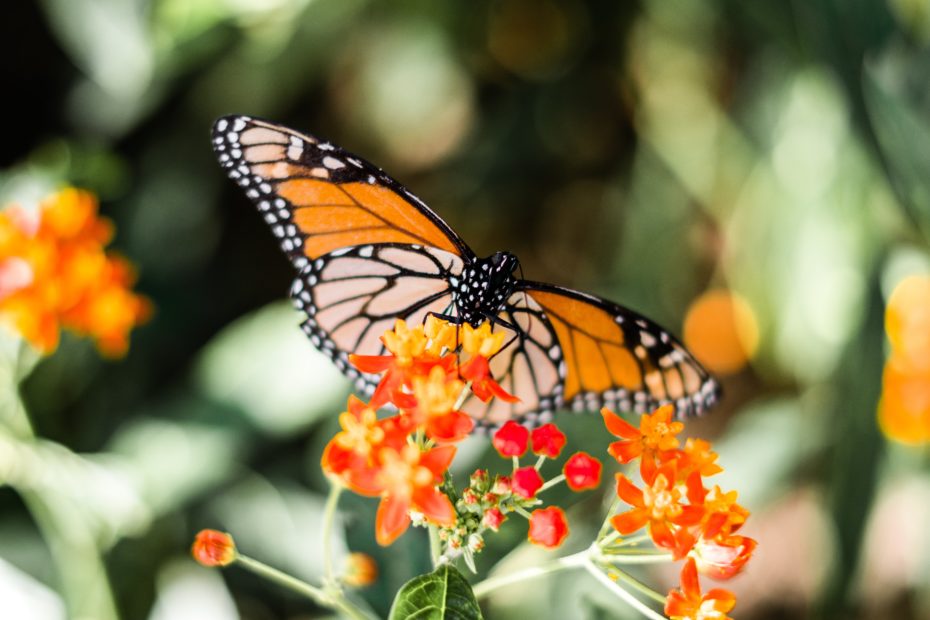 Our beloved monarchs are in need of food & shelter for their great migration to Mexico! Learn how you can turn your yard into a Monarch Habitat!

Monarch Butterflies are one of the most iconic butterflies in North America. Known for their orange wings with black lacy veins & intricate designs, they have a wing span of about 3-4 inches. Monarchs are split into two different populations, East & West, which is differentiated by which side of the Rocky Mountains they live on. Monarchs are one of the few migratory insects & with the help of the sun & internal magnetic compass they are able to make the 3,000 mile journey.

Depending on the time of year is where you’ll find them. Western Monarchs migrate to southern California for the winter. Eastern Monarchs migrate to the high mountains of Central Mexico. Eastern Monarchs make up the larger population of the two & make their way to Northern Canada along a migratory highway corridor that runs through the central United States. In spring the monarchs leave their winter habitat in Mexico and migrate north into Texas and the Southern Plains, then up through the Northern Plains and the Midwest, and finally up into the Great Lakes region. By late summer, eastern monarchs have spread north into Canada and eastward from the central highway corridor throughout the Northeast and Southeast states.From September into early October, fall southern migration to Mexico begins, with Monarchs retracing their steps back down South towards their winter habitat.

Since the 1990’s we have seen the Monarch population decline by over 90%. This is due to the loss of their host plant; milkweed. Monarchs need fuel for their long migration & make many stops along their way to mate, lay eggs, & drink nectar. Monarchs only live for a few weeks & need to lay the next generation so that they can continue their journey. Prior to human development, native plants were abundant. Now with rampant farming, highways & urban development many native plants & milkweed are gone. Areas that aren’t developed are sprayed with pesticides, herbicides, & insectisides making the area uninhabitable. Climate change also plays a role & alters the timing of migration as well as weather patterns, posing a risk to monarchs during migration.

You can help save the Monarchs by participating in the National Wildlife Federation’s Garden for Wildlife by planting a pesticide-free monarch habitat garden filled with native milkweed and nectar plants. Adult monarchs depend on many nectar sources for food during their journey, from spring and summer breeding to fall migration and wintering. Baby caterpillars are completely dependent on their milkweed host plants & will not survive without it. The lack of milkweed or nectar plant food sources during their journey may impact the number of monarchs that successfully arrive at their winter habitat. By creating a native milkweed & wildflower garden you can successfully create a habitat for our migrating Monarchs. Find what milkweed & native flowers are native to your area & start your Monarch garden today!